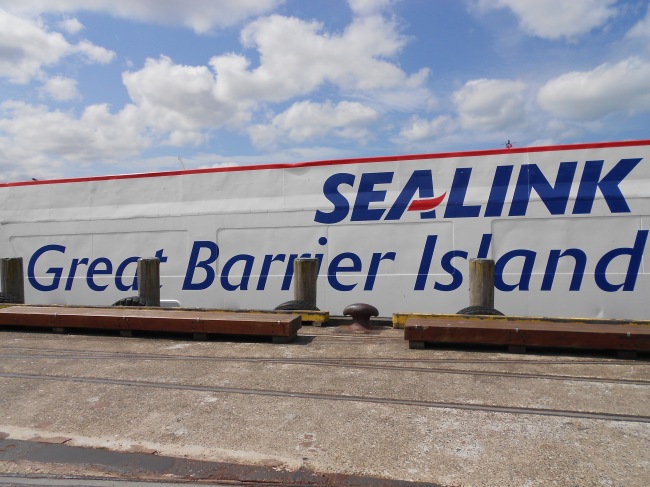 We’ve lost our hearts on Great Barrier Island. We have spent the most incredible 5 weeks in a secluded island paradise. We are going to break up our time here into a few different posts because there is so much to say. We have had very limited Internet while on the island so it was impossible to keep up with blog entries.

We didn’t know exactly what we were getting ourselves into when we booked our ferry tickets to GBI. The Lonely Planet Guide describes GBI as being “a world away” without sealed roads, supermarkets, or banks. We knew the trip here would be incredible though because people used words like ‘mythical’, and ‘magical’ to describe it when we told them where we were going. We ended up with such a majestic picture in our heads, it didn’t seem that anything would be able to live up to expectations. We were wrong. It has exceeded expectations. It really is a piece of paradise. 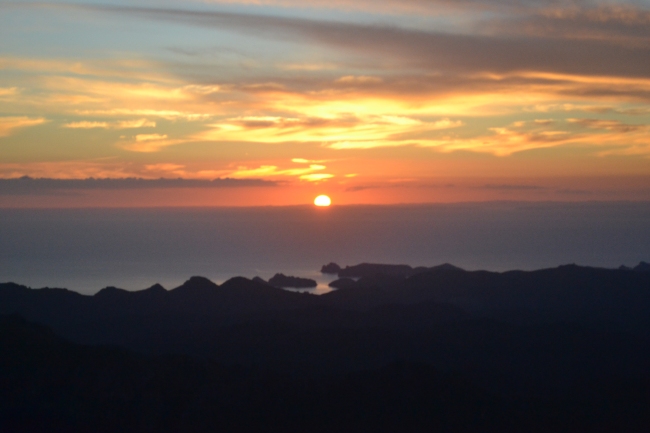 We should have known we were in for something special when on the ferry over, we got a free dolphin cruise and saw almost a dozen dolphins swim with the boat for about 15 minutes. 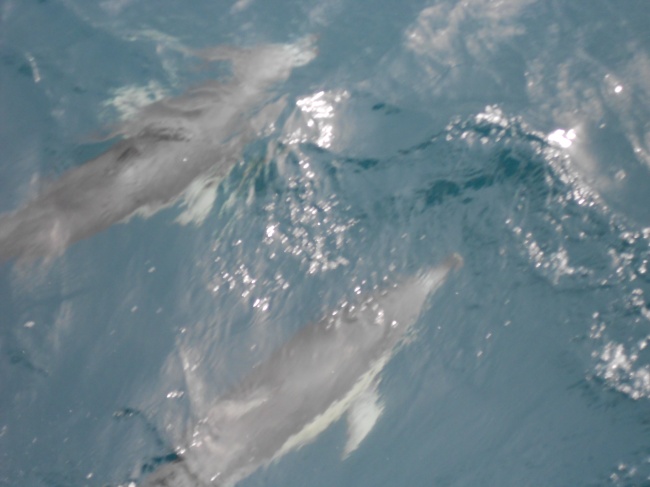 Great Barrier Island is a four and a half hour ferry ride from downtown Auckland. It has a year round population of only 800 people. This population swells over the Christmas holidays as many people have holiday homes on the Island (around 5000 in January). The small community is felt everywhere. The whole island is on a first name basis, and hitch hiking is the normal mode of transportation.

When we arrived, we needed to travel 5km to the pick up point we had arranged with our host family. They assured us that hitching was very safe on the island. Neither of us ever having done it before though, Kyle and I were very bad hitchhikers. By the time we got the courage to put out our thumbs, the car had passed. Eventually we did get a lift (a gentleman stopped to ask us if we needed a lift!). It is just the atmosphere on the island. As we have been on different walks throughout the month, often drivers will stop to ask if you need a lift somewhere.

A bit about our hosts; we are staying with Gerald and Caity Endt. Gerald’s family has owned this land on GBI for quite some time, and Gerald and Caity bought the property off of them around 7 years ago. They grow organic produce on quite a large scale. Caity went to University for botany and horticulture, and Gerald for agriculture. They are both highly knowledgeable, and huge wells of information. They are also incredibly generous, and have made us feel like part of their family during our time here. 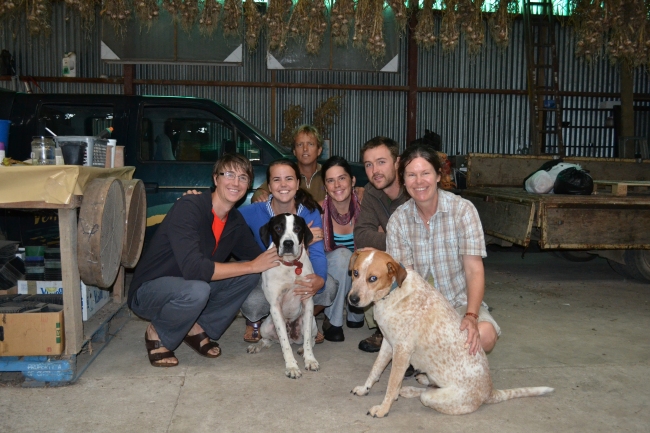 They are trying to reduce the dependency of GBI on Auckland for its goods. They provide organic produce on the island in multiple ways. They supply a lot of produce to the local cafes and restaurants (quite fun when we treated ourselves to lunch at the club and our salad was made with lettuce we helped to plant!) They grow seedlings for people who want to grow their own vegetable gardens, and then they sell their produce directly through weekly markets, and veggie boxes. It is an elaborate set up, but really incredible to have been a part of.

The property is about 14 acres, and they pride themselves on growing as large of a variety of produce as possible, striving to plant new varieties every year. They grow for example 10 varieties of tomatoes, 3 types of Zucchinis, 4 types of cucumber, etc.  We eat mostly their own food, and they are both wonderful cooks, so we have been eating a lot! 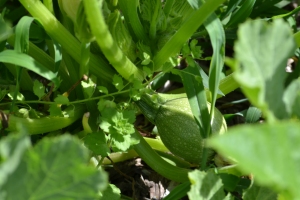 Above; Ronde de Nice, Below: Rampicante 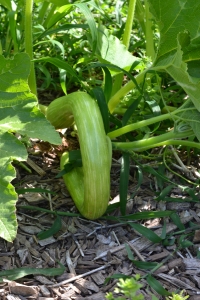 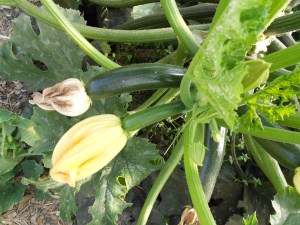 Our work on their farm has been varied, which is wonderful. Harvesting is usually the first 2 hours of the day, starting at 6. We came in the middle of the strawberry harvest, so we have been enjoying bowls full of fresh strawberries in the mornings. After harvesting, we could be doing any number of things, watering, weeding, planting, trimming, mulching, wood chipping etc. Because they are growing such a wide range of produce, there is always a different task to be done. They also have a beautiful mix of young and mature fruit trees. We have had the pleasure of enjoying plums, nectarines, figs, cherimoyas, and bananas right off the tree. 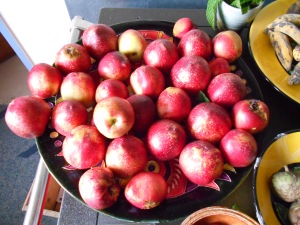 We really lucked out with the other wwoofers here at the same time as us. Sarah, an American from Oregon, and Gilles, a Frenchman from northern France, are absolutely amazing! We got along really well, and have made some fabulous memories together. 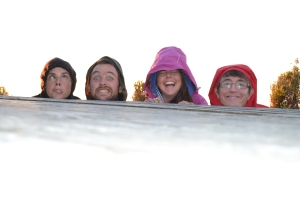 Our accommodation was in a spacious caravan. It was perfect for us, tons of room, and tucked into some walnut trees, which is a natural mosquito repellant! 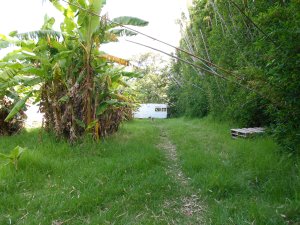 Great Barrier Island is ‘off the grid’ so to speak. There is no general power supply, all inhabitants either run off of solar power, or use a diesel generator. There is no water supply, just private tanks. There is minimal Internet, and even less cell reception, so it really has felt like a month ‘unplugged’. It is also just far enough away from mainland NZ that it has its own climate (temperate rainforest). This allows them to grow many things not possible for the rest of NZ. This has also leant the Barrier to be a bird sanctuary to NZ’s endangered birds like the banded rail or the tui. Both of which are supposed to be very rare in nature but their songs surround us all day. We also get to wake up in the morning to a parrot called the kaka every morning.

GBI has some of the most beautiful starry nights that I have ever seen. It looks as though the sky is freckled with tiny white spots. Thousands of tiny specks covering the entire night sky. Kyle is kicking himself for not having a tripod to be able to take a photo of the stars.

We worked Monday to Friday, then get our weekends off to explore. We will talk about that more in another blog entry. It is very special though because more than 60% of the island is DOC (department of conservation) land.

5 weeks came and went so quickly, it is hard to believe everything that has happened while we were here. We have both fallen hard for this beautiful island, and we will miss it very much. 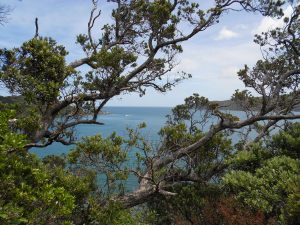